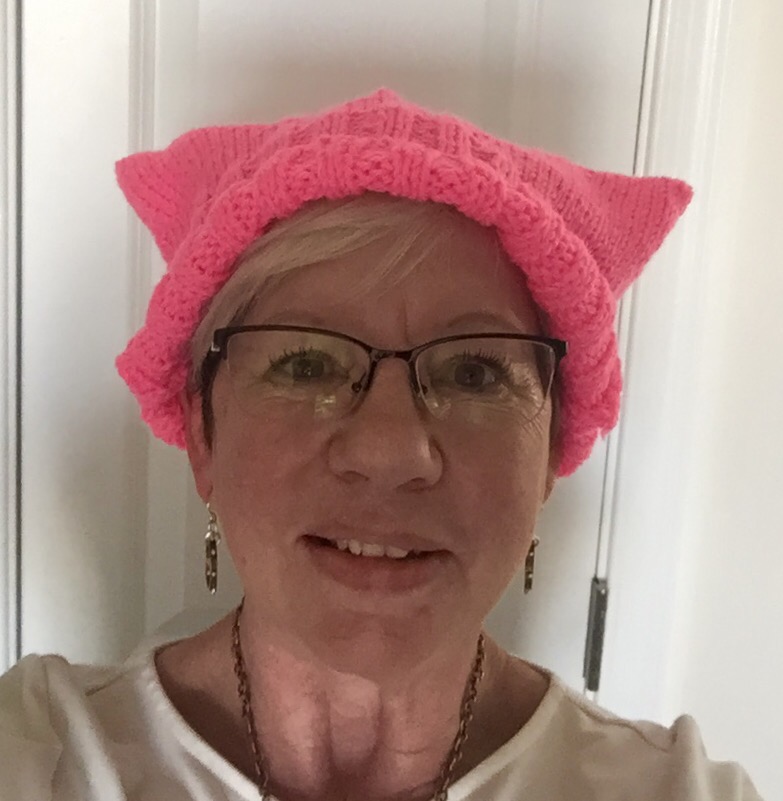 “Yes! I want one of those!” Even though I would look ridiculous. Even though I could scarcely remember how to knit. In a deep-down visceral part of myself I deeply wanted to raise a proverbial middle finger to Donald Trump’s careless objectification of, and assault on, women.

In case you’ve been living in a social media vacuum here’s the scoop. A few weeks before the Women’s March on Washington, and all the various protest marches in cities around the country, a pattern for a “Pink Pussy Hat” began making the social media rounds. Women all over the country quickly jumped on board at this attempt to provide a visual reminder to the world that our future President has bragged about getting away with “grabbing women by the pussy” simply because he was a celebrity. Women took great joy in knitting these pink hats with pussy ears. So much so that yarn shops in some areas reported a shortage of pink yarn.

In my case, I resurrected those rusty knitting skills and enthusiastically managed to knit one for myself. I was also give﻿n three to distribute to others on the march by a friend who wanted to be supportive but couldn’t attend any of the protests. We were thinking of how this could be a very visible sign of our disgust not only for the sexist and sexually violent actions of Trump but also for the “war on women” being waged by the Republican Party as they continue to pass legislation that makes women’s lives more challenging.

But not all of the women knitted in anger or as a protest. Many of the knitters did so as a way to work through grief and fear. For others it was  a way to connect, to create community. Knitting groups formed with this project in mind. Even Cecile Richards, the president of Planned Parenthood, was recently spotted knitting her very own pink pussy hat.

So I was in great company! I’d knit one. Take it to Washington. Put it on and march.  Easy-peasy, right? Well, maybe not quite so much.

As these things sometimes go, there was some very legitimate pushback. And a lot for me to learn. Facebook posts and articles came fast and furious as women began to question the wisdom of the “pussycat movement.” This isn’t serious, some wrote. This will leave a visual image of women wearing silly pink hats instead of one of marchers with very imortant messages. Those who don’t agree with us will use the hats to demean us and as an excuse to not take us seriously.  These hats reinforce stereotypes of women as weak and pleasing. The hats are attempting to present women as monolithic and our issues as ones simply related to having vaginas, which many women identifying as female don’t have.  One woman of color argued that her vagina isn’t even pink and having just one color (pink) is racist. They reduce, some argued, a very complex, intersectional movement, to one visual motif. These are an old, white woman thing. Please,” they asked,  “don’t wear the hats.”

And, as usual, I listened, and considered. Read and considered some more.  Shouldn’t it be OK to have fun with this? To stand up in whatever way I want? But what, I countered to myself, if it’s officially “frowned upon?”  And would I be betraying women who will be uncomfortable if I wear it? Should I take my hat and wear it or not? Should I take it and just see what the prevailing attitude on the march would be? I mean, they do look pretty ridiculous and, as predicted, women who oppose the march began posting pictures with captions like “These women expect us to take their message seriously?”  And I do agree with many of the points brought to light by those opposed to the hats. I began to lose my confidence in a decision I’d been so sure of. Was wearing this hat a means of self-expression and protest or support of a plan to inappropriately “unify” the marchers in really uncomfortable ways? These hats were becoming a big, confusing stressor. They had taken on a life of their own. What to do?

I posted a link to one of the “Please, don’t” articles on my Facebook page and suggested that I might not be wearing my hat at the parade. I received feedback from my daughter and daughter-in-law, two young women whose opinions I value.

Daughter-in-law Amanda, who will be marching alongside me, wrote this: “The point of the march is, in my opinion, that we will not conform to what Trump wants us to be. By that token, I will not conform to any “prevailing opinion.” You want to wear a pussyhat? Wear it for YOU. You don’t owe anyone an explanation.”

Daughter Lauren, who lives in Taiwan, wrote this, primarily about the concern that those who disagree would make fun of us or that there would be pressure at the march to conform in some way: “Every cause that caused a ruckus has been in some way diminished by dominant culture and powerful people pointing to some part of it or another and saying, “See? See what kind of people they really are? Just look at their…(Mohawks, tattoos, piercings, violent event, gender, disgraceful protest at the president’s own house, “stupid” hats).” The power comes in not letting your cause be rebranded. You are you. Don’t let fear that dominant culture won’t take you seriously make you play by their rules. Unprocessed hairstyles were a big marker of the civil rights movement. Do you think black protesters decided to change those hairstyles just in case the newspapers or white majority used them to discredit the march? Taiwan is still fighting for rights and protections for queer people. Doesn’t stop protestors (and Pride is a protest still) from covering themselves in rainbows. The sheer size makes it something that cannot be discounted.”

I’m a “big tent” person. I believe strongly that each of us should do this however we feel compelled. I listened to the concerns. I appreciate the concerns. I honor the concerns. I have learned so much about the limitations of my own filters through the writing of these women. But this march has to be a “big tent” event. The concerns from the beginning have been that the tent wasn’t large enough, wasn’t specifically inclusive enough. I couldn’t poss

ibly honor every concern expressed by others in terms of my own expression and participation.

I want to be part of that sea of pink. I see it as a nose-thumbing expression of female power, silliness and all. It has meant a lot to friends in my community to knit hats to send along with me to pass out to other women. That is their connectiion to the event, through me.  So, here’s to those with hats and those without. May we march together, unified by our desire to come together. To stand up. To speak out. To make a difference. However that works for each of us.

4 thoughts on “Those Crazy Pink Hats: A lesson in intersectionality”